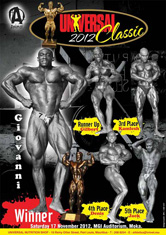 The show also rewarded the best poser, the most progressing athlete and the most promissing athlete, the supporting gym. Trophies and cash prizes were attributed to them all.